…a ground-breaking book that looks at marriage from a brand new assumption: ‘What if we don’t assume it’s forever?’Wendy Mackowski, MA, CPCC, Holistic Life Coach
I’ve read and listened to countless offerings…I found The Five-Year Marriage® to have the most practical, useful and helpful takeaways of all.Harry McWillliams, Financial Planner
…should be mandatory reading for every engaged couple.. Annmarie has definitely earned her nickname The Mother of Modern Marriage.Doreen McGettigan, Author 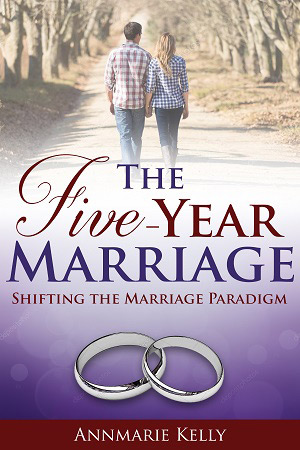 Wayne, PA – Annmarie Kelly was recently married for the seventh time! Each of her six previous marriages, to the same man, lasted for just five years. Since 1988, Annmarie has been blazing a new trail through the wild adventure of marital relationships. For this inventive new twist on marriage, she’s being hailed as the “Mother of Modern Marriage.” Now she’s finally sharing the secrets and how-to’s in her new book, The Five-Year Marriage®: Shifting the Marriage Paradigm.

Annmarie Kelly was, in 1988, in the same place as many women are today. Her then live-in boyfriend, Joseph Eagle, wanted to get married. She was hesitant. Kelly saw how marriage changed so many of her girlfriends – and not in a good way. She feared the stranglehold that the “until death do you part” vow puts on a woman. Also, she felt the relationship with Joseph was good; she didn’t want marriage messing with it. Kelly was content to live together but for Eagle…not so much. She felt conflicted. She didn’t want to get married and she didn’t want to break up.

That’s when Annmarie Kelly got the idea to try something different. Would her partner be game?

When she suggested her “five-year marriage®” idea to Eagle, the shoe was on the other foot – suddenly he was the one who was hesitant. But after much discussion, he agreed. They married six weeks later…for the first time.

A rough second marriage put Kelly’s five-year idea to the test. As it turned out, the five-year concept was pivotal in empowering the couple to revisit and rethink their initial marital agreements, and then renegotiate them – in 1993, 1998, 2003, 2008, and 2013. Recently, after five years of more change, and a summer of renegotiating their agreements, they married again.

Among the coaching-style lessons that are dotted with personal-experience anecdotes, in The Five-Year Marriage®: Shifting the Marriage Paradigm, Annmarie Kelly shares:

The Five-Year Marriage®: Shifting the Marriage Paradigm provides a fascinating challenge to couples, both in the way they view the marriage partnership and, more importantly, how they live that all-important relationship. Kelly’s Five-Year Marriage® encourages individuals to consciously choose the agreements they make with their partner and then, fairly and respectfully, hold themselves and each other accountable. The Five-Year Marriage®: Shifting the Marriage Paradigm is like giving individuals, unmarried/engaged couples, and even couples who are already married, both a warm hug and a kick in the butt.

Annmarie Kelly’s books on women’s empowerment, Victorious Woman: Shaping Life’s Challenges into Personal Victories and Victory by Design, have helped countless women take charge of their lives, reinvent themselves, grow into the best of who they are, and create better futures – the kind that they love waking up for every morning.

Now she’s helping women – and the men who love them – find a better way to be married.

Annmarie Kelly is an award-winning thought-leader, author, women’s empowerment speaker, and the founder of The Victorious Woman Project and its annual scholarship-for-women fundraiser, the Girlfriend Gala. Her Victory Chicks Radio interviews are available on iTunes, Spotify and iHeart radio. She lives in Chester County, Pennsylvania with Joseph Eagle.