OK, I’m resigned to the fact that vacation is over. But I really wanted to squeeze one more thing into it before I head home. One last little adventure.

For those of you who haven’t seen Wahlburgers: it’s a reality show on A&E, I’ll confess that it’s my newest guilty pleasure. Last year it was Duck Dynasty…but this year it’s all Wahlbugers. In it, actors Donnie and Mark Wahlberg talk their brother Paul, a well-known and well-respected chef and owner of Alma Nove, into opening up a burger joint across the street from his fancy restaurant. What makes the show so funny is that Paul is the older brother but Donnie and Mark give him so much grief and Paul just takes it. What I find so attractive is that, under all the teasing, there’s so much love. It feels good to watch.

Also, I love the scenes with Alma, the mother of the nine Walhberg kids. Alma doesn’t take any crap from anybody and these grown men are scared to death of her and all fight over which one of them is her favorite. Funny stuff.

So here’s how I got to Wahlburgers: Joseph and I were already in Amesbury, north of Boston. Wahlburgers is in Hingham, just south of Boston. We planned to take the Mass Turnpike home and I noticed that it’s (sort of) inbetween the two towns. I talked Joseph into taking a little side trip to Hingham. Joseph loves burgers, so I knew it wouldn’t be a hard sell. 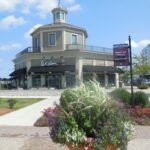 Between the marina and Wahlburgers: Alma’s Across The Street

Hingham is an interesting little community on Boston’s south shore. It has a colonial history and is a high price tag kind of place. There’s a little commercial section called The Launch and, if you’re from the Philly area, it might remind you of a mini-Penn’s Landing.

We were warned that the lines were two hours long. Joseph and I were hoping it wasn’t true. We wouldn’t have waited that long; we had a long drive ahead of us.

At first we just drove past the front door of Wahlburgers. The line didn’t look too bad. We parked behind Alma Nove’s, which is right on the marina…and there must have been a hundred boats sitting in the water…it was something to see!

Then as we walked through the doors of the now-famous restaurant, there was Paul Wahlberg. He was greeting customers as they came in the door, taking pictures with them, and being as nice as could be. There was no one behind me, so I chatted with Paul for a couple minutes and then Joseph took our picture. And I think I have a little crush on Paul. What a sweet man!! 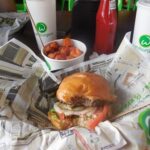 Wahlburgers is a fun, energetic place. A lot of lime green. It’s not a big place and it’s split into two sections. One side is like a fast food place – you put in your order, pay, and, when it’s ready, pick it up. You can eat in or take out – like a McDonalds. Or, you can go to the other side and get served.

There’s the signature lime green everywhere, along with the branded “W” – which is even on the ladies room door (the logo is also on the men’s room door, upside down!). We opted for the “full-service” side instead of the “fast food” side. The menu isn’t big so it didn’t take too long to choose – and Joseph and I both chose “Paul’s Favorite” – a plain hamburger with special sauce and “government cheese” – which is a reference to and a running joke about how the family was so poor that they ate cheese in those huge blocks given out by the government every month or so; my mom used to get them too, so I immediately knew the reference. We split an order of sweet potato tots that were so fresh that even the French-fry-loving Joseph was impressed. 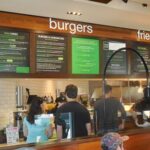 For those of you who grew up in Delaware County: It reminded me of Charlie’s hamburgers – a place in Springfield PA that was beyond compare, but has been gone for years and years. Most people who remember Charlie’s do so with a sigh of regret for its demise. 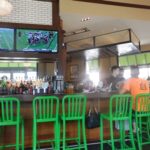 The service was equally good. Every server was upbeat, chatty and on the ball. It was such a good experience that I’m looking forward to going again.

If you love burgers, but won’t be getting to Boston any time soon, take heart. I was reading an interview article with Paul that says they have plans to open in Philly. Remember a couple weeks ago when Sharon Pinkenson came to Happy Hour? She’s the dynamo woman who brings all the movie production into town…and she’s brought in four or five movies that starred Mark Wahlberg. In the article Paul explained that, because they’ve gotten to know people here, Philly is likely to be the first place they will open other Wahlburgers – that and Ontario Canada, for the same reason – they know and trust the people in both places.

After my own Wahlburger’s experience, I can’t wait!

We left Wahlburger’s and traveled the remaining 7 hour drive home listening to the balance of James Patterson’s audiobook Honeymoon. It was pretty interesting and had several twists and turns, so it added excitement to an otherwise long trip.

I’m glad to be home, grateful we had safe travels, sad that Maine Vacation 2014 is over, happy I took so many pictures. I hope you enjoyed seeing them as much I enjoyed sharing them with you.

The Land of Charlotte’s Web!