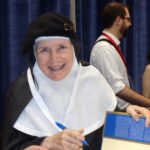 When I was a kid, I watched a lot of television, including a lot of old movies. Sometimes it was what made me feel safe. One of those movies was about a bunch of flight attendants. I don’t remember all the details but actress Dolores Hart got angry at some guy who mistreated her. In one scene, the camera did a tight shot of Hart as she said, “then you can just go to hell.” In my life, it was the first time I ever saw a woman stand up for herself with a man. It made a lasting impression.
Not long after that movie was filmed, Dolores Hart left Hollywood and joined the convent. It was a shock to many of her time because she was incredibly beautiful and was linked to many of the hottest men of the time, including Elvis Presley. She’s lived for over fifty years as a sister of the Benedictine order and is the reverend prioress of the abbey in Connecticut.
Today I met Reverend Mother Dolores at Book Expo. She is a joy-filled woman with kind eyes that shine with a mischievous twinkle. She wears a “habit” that reminds me of the Catholic sisters of old. But, with a whimsical twist, she also wears a beret and somehow she makes it look like just the right thing.
As she signed her book, The Ear of the Heart, I told her my “Dolores Hart” story. As I did, she remembered the movie with glee. When I explained how much impact that one scene had on my life, she laughed and said, “I’m so glad I could bring some of the masculine into your life.”
Mother Dolores ends her book with the same thing she signs it with, “PAX.”  No surprise. The kind of peace that shows on her face isn’t something anyone can fake. It’s the kind that’s either a part of your being, or not. It’s a part of hers.
In her book, Mother Dolores describes her journey in great detail. She also shares pictures from both her Hollywood life and her monastic life.
My own journey of victory was long and tedious. But, along the way, I saw glimpses of light through people (mostly women), movies (with scenes like the Dolores Hart scene), characters from television shows and books. Certain images stuck in my brain and made a difference.
Victory isn’t fun or easy. Whenever you push yourself out of your comfort zone and into the greater expression of who you are, it’s usually scary (at least a little bit) and sometimes it’s a really, really hard. Having motivating words or images helps you keep going when you feel like quitting. And even though it doesn’t feel good through the beginning or the middle, the end result is worth it.
If you don’t victory, what’s the alternative?