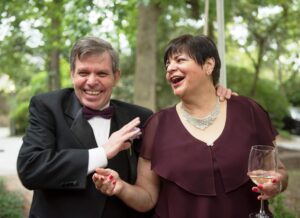 We waited until almost the last minute. Though it was early September and we had an intention and the celebrant, we had no place to go.

Among the places we called was the world-renowned Longwood Gardens. They were clear from the first moment: they don’t allow weddings – even one as tiny as ours. There was also the Newman Center, West Chester University’s Catholic center for the students. Father Nordeman was receptive and very gracious. He said he could marry us after the daily 4:30pm mass. However, that meant Pattie Painter, whose victory through multiple cancers is chronicled in Victorious Woman!, couldn’t do it. In the years since Victorious Woman was published, we’ve become friends, so Joseph and I really wanted Pattie to perform our ceremony.

Then, on the Thursday before our special day, Joseph called the Tyler Arboretum in Media PA. They couldn’t have been more welcoming. They told Joseph we could have our ceremony anywhere on the grounds.

On Friday, I let Pattie know we were still on for September 24. She said she’d write our ceremony and asked if we wanted some special poems. I wanted the Apache Wedding Blessing and Blessings for a Marriage by James Dillet Freeman. We’ve used both of those at each of our weddings, so both are very special to us. We also chose the poem, Love by Roy Croft. It was Pattie’s suggestion but it sent chills up my spine because I first read that poem when I was a teenager. In those often-lonely days, I would read it often, telling myself that it was just the way I wanted love to feel. Who knew, so many years later, it would be just that…how I felt at my 6th wedding. Another tribute to the power of visioning!

Later that night we started making invitation calls. Joseph called his twin, Tom. I talked to my cousin Maryann and asked if she and spouse, Richard, would join us; both of them are special to me and to Joseph. Joseph also called his friend, Pat, the widow of Danny, Joseph’s best man at our first wedding. Danny died suddenly, of a heart attack, shortly after his 50th birthday. Joseph still misses Danny and it was important to include Pat, whom he knew as long as he knew Danny.

We knew our invitation was so last minute and was on a workday afternoon, that everyone might not be able to make it. But happily, Maryann, Richard and Pat were able to be part of our special day. It was pretty small group, but we love the people who were there and they love us. And that’s what we wanted – a day filled with love.
On Saturday morning I spent about an hour online looking for a dress. I only looked at places that had brick and mortar stores in my area. I wanted something in a purple and found a lace dress I liked at Dress Barn. I called a local store and a really helpful woman said she’d look. When she got back on the phone, she was upbeat. “Yes, we just got that dress in and we have your size. Do you want me to put it on hold?” It was a happy moment – the dress I wanted, in my size, in a store near the Tyler Arboretum. A plan was coming together.

Next I called Maryann who agreed to join us to help us pick out a spot at the Arboretum. She lives around the corner from the gardens and has spent a lot of time there. I knew she’d have a good idea for the right spot. A shower and some breakfast later, Joseph and I were on our way.

First stop was Dress Barn. I tried on the dress and wasn’t sure it fit right. I tried on a few others, but they didn’t do the trick. So I tried the first dress on again and went looking for the saleswoman. As I did, I passed a customer who looked me up and down and said, “Ooooh, that looks beautiful!” OK, I was feeling a little better. I went back to the dressing room and looked again. I saw another saleswoman and asked her if she thought the dress fit right. She asked what I was wearing underneath. “Bra and panties,” I answered. She was shocked when she said, “No Spanx…no nothing?” She assured me that, once I put some foundations in place, the dress would fit beautifully. She was right.
Then we picked up Maryann and went to Tyler Arboretum. Maryann was a great guide and took us to different sections of the garden so we could think about how private it would be, how it would look for pictures, etc. The sun was shining everywhere and the setting was so peaceful. After about an hour we found the perfect place for us. It was a little cubby spot, full of greenery, on the side of one of the buildings.

On the way home, Joseph and I stopped at Il Granaio, our favorite local Italian restaurant. We wanted to make sure we reserve just the right table for our “wedding reception.” We scored exactly the table we wanted!

We had just one last stop, to Charming Charlies, in search of “just the right accessories” for my dress. The good thing about Joseph is that he doesn’t just hang out in a corner being annoyed, he asked what I wanted (something that sparkled in the sunlight); he helped me find it.

The Five-Year Marriage Plans Coming Together

When we got home, I had an email from Pattie. She’d written a beautiful ceremony. It included everything we wanted. She suggested that two of our guests do two of the readings. We loved the idea!

When Tuesday came, I left home early for some beautifying. On my way home, I stopped at Lorgus, our local florist. I talked to Mary and asked her if she had a boutonniere for Joseph and then slide in the request for a small bouquet for me. “When do you need it,” Mary asked, never expecting I would answer, “this afternoon.” I was thoroughly prepared for Mary to be annoyed and tell me I was crazy. She didn’t (though she did sort of roll her eyes). What Mary did was took me around to the refrigerators and asked what I liked for color and style. I paid and left. A few hours later, Joseph picked the flowers and, when I saw them, I couldn’t believe how perfectly Mary put together the just right bouquet for me.

It was mid-afternoon when we got to the arboretum. The sun was shining brightly and the weather was crisp and clear – a perfect fall day. When we got to the spot Joseph and I had chosen, and because I’m so used to be the speaker/workshop leader, I felt suddenly “lost” for what to do and had a moment of panic. Of course, I didn’t need to worry. With just a few words, Pattie took charge and got everything in place. Immediately I felt myself relaxing into her most capable hands.

While Joseph and I looked at each other, Pattie celebrated our love and commitment with the words she’d written. Maryann did a reading and so did Pat. Richard took pictures and so did Pattie’s spouse, Tom. Joseph and I wrote our own vows and said them. I surprised myself when I got choked up while reading mine to Joseph. The commitment two people make is always so intimate. I find that the longer Joseph and I are together, the more meaningful our commitments to each other are. I also think we are more and more grateful to be together, and grateful that we still choose each other.

Then, before we knew it, Joseph and I were married!

We popped open a bottle of bubbly, had a toast, and took pictures. Then we all headed to Il Granaio. Being with people who are so special to us made it a blessed event. The wine and scotch added to the sparkle. Richard knows the owner pretty well through business so we got some extra-special treatment.

All of a sudden, that fast, our wedding day was over. When we got home, we opened some gifts and cards and heard a precious email from our friend, Sue, who was traveling in California…and thought enough to call and leave a warm message.

Wedding #6 has some very special memories with special people. But the most special of all is that Joseph and I chose each other…once again.