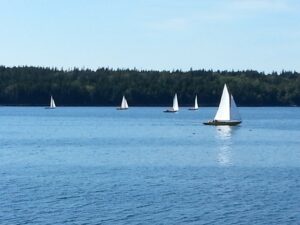 OK, we all have one. I’m confessing mine. It’s television shows. And not just any television shows. Mindless ones. It’s an addiction…no, it’s my tranquilizer. Some people drink, others smoke or take drugs, some gamble. I watch TV.

When I was in my early twenties I had my tonsils out.  As I sat in the hospital room waiting to be wheeled down to surgery, the woman in the next bed was moaning like crazy. I was so jumpy that the nurses wanted to give me something. I told them ‘no’ but to get me a TV and earbuds. That was all I needed. I don’t know what I watched – and it was before cable so it wasn’t like I had tons of choices. Mindless…

The most difficult part of being in the cottage on Clarks Cove has been falling asleep without the TV. In past years I’d watch TV in the living room until I couldn’t keep my eyes open and then I’d go to bed. But, in just the few steps between the chair and the bed, I’d wake up. I tried everything…a DVD in my laptop (the light bothered Joseph), a music CD (music wakes me up)…I even took to praying the rosary as a form of meditation. That eventually worked, usually in the 4th or 5th decade – and I felt plenty holy but not rested!.

This year, the iPad, Joseph and amazon solved the problem! I was able to get in bed and watch old shows online, like Blue Bloods, Ghost Whisperer and my favorite, Medium. With that device in place, every night I was asleep in minutes. I don’t think I ever even got to the end of the first segment on any of them. In fact, I got interested one particular episode of Medium and had to run it five times until I got to the end. And if I woke up during the night, it was a “rinse and repeat” deal…and I was out like a light!

I know. I know. Falling asleep with TV is supposed to be bad for the body and the psyche. I think about that and I hope I’m not undoing all my vision board work. However, I don’t think I am…I’ve been doing this TV thing my entire adult life. And I’ve been doing vision boards almost as long…and I know they worked then and still work.

But now YOU KNOW my dirty little secret!!

Do you do the same thing? If not, what’s your “dirty little secret?” Do you have any “ticks” that you are willing to finally share? C’mon…come clean! The truth will set you free. OK, maybe not, but I’ll bet you aren’t the only one doing it!