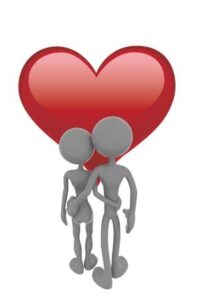 Since we’re in negotiations for our next marriage, we are meeting about it…supposedly once a week. But it’s really a challenge to make the time. Still, without the communication and the sharing, we would be lost for a direction or a decision about how we want to go forward.

Family Meetings: The Key to Discovering What both Partners Want in a Relationship

Our meeting was yesterday, but we were meeting friends for dinner. So, because we were coming from different directions, before we met the friends, Joseph and I got together at a coffee shop to sort of debrief our days. We talked about being stuck, not just the relationship but in life and in our businesses.

During our meeting I shared an idea (a dream, really) that I’ve had for a long time. I mentioned it to Joseph a while back but he didn’t connect to it…so, in the relationship, it was “my thing” vs. something for us as a couple.

Then came the “caregiving years” where we were taking care of both our mothers. I’d totally forgotten about my dream venture. Then, on a business trip to Atlantic City, something someone said struck a cord in my brain. I was reminded and excited at the same time.

Being Part of Each Other’s Future

So, at our meeting, I again brought it up to Joseph. But this time something different happened. I think because of where we were, the kind of coffee shop, he suddenly saw how he could be part of the same picture. Whatever happened as we sipped our cups of tea and shared our ideas was good. It opened a door for a new conversation and moved the process forward.

That’s what happened in our second marriage. I think we thought things went so well during the first marriage, we could coast through the second one.

That’s how we ended up talking to a marriage counselor. And the “fix” wasn’t magic. It took time and effort and we let other stuff go – fun stuff – to focus on fixing what was wrong.

It’s just like how a constant drip in a faucet doesn’t seem like a big deal at first. But, as anyone who’s done it knows, if you don’t get a plumber in, you’ll end up with a big honkin’ water bill and maybe even a broken pipe or some other “treat” – like a burst pipe.

“We move Faster & Farther When we Move Together”

Listen, I can’t tell anyone that it’s easy to keep the lines of communication open. But I can tell you this, at least from my experience in my own relationship and from helping others: we move faster and farther when we move together.

Can you set up a meeting with your sweetie to talk about where you both want to go over the next five years? Need help getting that conversation started? Check out the Curiosity Conversation Cheat Sheet!

Connect with the Five-Year Marriage®