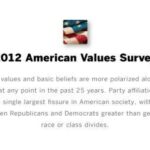 You might be surprised! But if you feel as frustrated as I do with the lack of political energy to get anything done for us in Washington DC, it seems we can look to our values for what’s going wrong.

Last year The Atlantic/Aspen Institute American Values Survey published an eye-opening survey. Here are some of the findings:

Read more at The Atlantic
Also last year, the Pew Research Center conducted research with about values and politics, comparing them between 1987 and 2012. It found that no political party is solely responsible for the political divide. However, the research also found that the gap between Republicans and Democrats is greater than it has been. It’s a hefty survey but you can get the highlights here: American Values Survey
Is there a personal, individual disconnect with our values and is it hurting us now and hurting future generations?