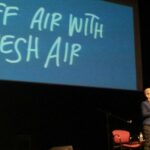 Last Saturday I was at West Chester University last week to see PBS’ Fresh Air host Terry Gross.
If you’ve never seen her, Terry Gross is a tiny woman with short hair and glasses. From the picture you can sort of see that she doesn’t look like much more than a speck on stage. EXCEPT, for as tiny as she is, she really fills that stage.
I didn’t realize it but Terry Gross has been doing Fresh Air for a long time – since 1975 – way longer than I realized and long before I listened to the show. After all that time, I wasn’t surprised that she has quite the following! Not only was West Chester’s Asplundh auditorium packed at 2pm on a Saturday afternoon, the balcony was filled with West Chester students – kids who were even born when she started her show!
Terry told stories about the famous people she’s interviewed. She used a combination of audio and animated powerpoint slides to highlight those stories. And before you start thinking “ugh…PP” I want to tell you that her PP’s were nothing like the ones you usually see. Terry’s PP slides were drawn by the Pulitzer Prize-winning political cartoonist Tony Auth, who did the editorial cartoons for The Philadelphia Inquirer and now works for WHYY, the PBS station in Philly.
The PP show started with some of Terry Gross’ background. She was married really young but was still in college & in the middle of a divorce when she started her first radio show. She says at first she didn’t want her picture associated with Fresh Air because she didn’t want to get in the way of the interview. But then she joked about how many people think her voice is really sexy and used the PP to illustrate the sexy, buxom blond woman they thought she looked like. Many people couldn’t match the voice & the person. So she started using her picture
Terry shared stories about some of her most fascinating or interesting interviews. Among the excerpts she played was a salacious interview with Gene Simmons from KISS during which Simmons told Gross that if she was going to welcome him with open arms, she’d have to also welcome him with open legs…and Gross told him it was an obnoxious thing to say. She handled his inappropriate remarks with great savvy…and the interview made national news. It’s archived here: Gross interviews Simmons
Terry Gross said she’s not political, but I don’t think she hides her obvious liberal slant. That came up in excepts of an interview with Bill O’Reilly. He got in a dust up with Gross about the unfairness of the interview compared to one she’d done with Senator Al Franken. Terry played the part of the interview where O’Reilly really let her have it and then walked out of the interview. She admitted that, later on, her ombudsman agreed with O’Reilly…that she hit him hard while the Franken interview was all softballs. What do you think? O’Reilly on Fresh Air
But the most touching interview as with Maurice Sendak. You know him – he wrote Where the Wild Things are. She interviewed him shortly before his death and he said, “I cry a lot because I miss people. They die and I can’t stop them. They leave me and I love them more… What I dread is the isolation….There are so many beautiful things in the world which I will have to leave when I die, but I’m ready, I’m ready, I’m ready.” His words brought tears to my eyes. Maybe they will do the same to you: Sendak & Gross
Terry Gross has a way of interviewing that makes you feel she is having an intimate conversation – and that you are in the room with her and her guest. And I think that’s a talent.
But you know something else? She’s a woman without airs. On Saturday, Terry Gross walked onto the stage in jeans with a plain shirt, a tweed jacket and flat brown shoes. She made no effort to be spectacular…she was just being who she is. And who she is, for that auditorium filled with people who were Terry Gross fans, was more than enough.
It reminded me of how important it is to always be who you really are. When I’m interviewed about Victorious Woman, interviewers often asked me what was the most important advice I could give a woman. I always said, “Be who you really are,” & I really believe that. NO ONE will ever be a better you than you.
If you aren’t being your BEST and most AUTHENTIC you, take a look at Terry Gross’ career. Being herself has opened thousands of doors for her. And then set a goal for 2014 to do just that: became the very best YOU – the REAL YOU – that you can be.