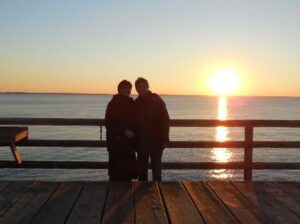 Change. It’s never easy.  But sometimes you can find a way to make the challenge softer.

After years of hosting Christmas dinners for my mom, the parents of a friend, and Joseph’s siblings, things changed. My mom passed, my friend’s parents (with whom we usually spent Christmas Eve, moved to New Mexico with their son, Joseph’s brother adopted his new spouse’s family and he hasn’t been keeping in touch with his sister since their mother passed. And so we were just the two of us.

At first, it was a little strange. But since I added the radio show to my work this fall, not having to get ready for eight or ten people wasn’t so bad.  Still, this year I wanted a little tradition and a little excitement.

So, on Christmas Eve we went to a beautiful service at the Daylesford Abbey. Then, on Christmas Day, Joseph and I drove to Williamsburg Virginia. Driving together is something Joseph and I like to do. The weather was mild and there was almost no one on the road. The drive through Delaware and Maryland was dotted with WAWA stores (like an upscale 7-11) that were open, so that’s where we had sandwiches for breakfast and lunch. The drive was so peaceful. 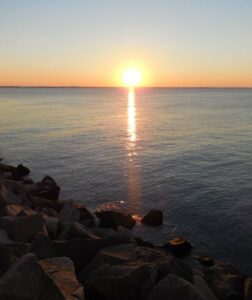 Having done this trip before, we knew to time the drive so that we would be crossing the Chesapeake  Bay on the Bay Bridge Tunnel right at sunset.  Though it was freezing on the fishing pier, we enjoyed the quiet beauty of the shore as we watched the sun sink into the bay.

By the time it did, however, we needed a few minutes to defrost when we got back into the car. Happily we found a WAWA and some hot tea just after we got onto Virginia’s mainland. Feeling fortified, we drove the rest of the way to Williamsburg. We checked into our hotel and headed for the Williamsburg Inn, where we enjoyed a couple drinks and a relaxing dinner served by a charming woman with a good sense of humor. 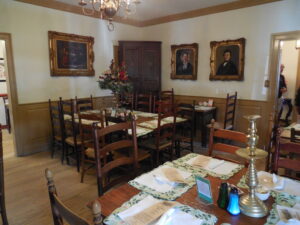 We were only in the Williamsburg area for a couple days, but while there we had a “plantation breakfast” at a wonderful old southern restaurant, The Old Chickahominy Inn. The breakfast included the oddest biscuits I’ve ever seen – flat and oblong-shaped…and with a taste that makes me want to go back again soon.
The day after Christmas we went to historic Jamestown to see the active archelogical dig. There wasn’t any digging going on through the winter but our tour guide was one of the dig volunteers. He was so knowledgeable and painted a fascinating picture of life during those early days in the 1600’s. 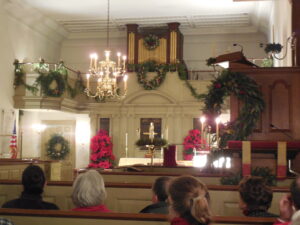 That night we enjoyed a candlelight concert at the beautiful Bruton Episcopal Church. George Washington, Thomas Jefferson and Patrick Henry are among those who worshiped at Bruton in the 1700’s. But it’s a modern-day, very active parish and in this day and age, even the current governor worships in the “governor’s pew” when in town.  The big treat for me was the chandelier. It’s candlelit and gives off plenty of soft light, added by electric sconces on the walls. After the concert, I was fascinated watching the process of putting out all the candles with snuffers. 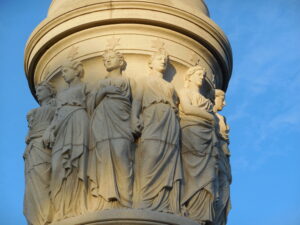 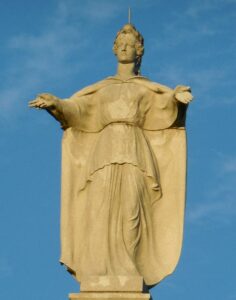 On Friday we went to Yorktown, which was a significant battle during the Revolutionary War. There I took more pictures of the Victory Monument than anyone would ever need to…but what’s a Victorious Woman to do? Look at these beautiful ladies!

As the sun set, it was such a mild day that we  enjoyed a long walk along the river at dusk followed by a couple drinks at a local tappy.

We made it an early night so we could leave early. We returned home yesterday with just enough time to get ready for the party we’re hosting on New Year’s Day.
I don’t know what we’ll do next year. Williamsburg is where Joseph and I took our first vacation, so it always has a special place in our hearts. But I don’t think I’ll make Christmas in Williamsburg an annual event. But for this transition year, in the midst of this year’s change, it was a great idea.

Maybe next year I’ll just stay in my nightgown and have a video movie marathon.