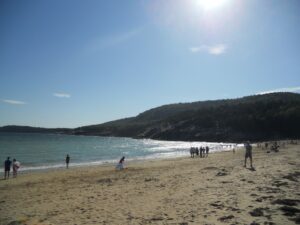 It’s Monday and Joseph and I decided it was time to start hiking. I remember my first time on this one, called the Ocean Path. I was fascinated by the fact that it was ocean on one side, forest on the other and beauty all around.

The hike starts at Sand Beach, one of only three sandy beaches on Maine’s rocky coast. Yes, you can find beaches further south along the Maine coast, like Old Orchard Beach, Ogunquit and other more southern towns. But sand beaches are only found on 2% of Maine’s 70 mile coast, and hardly any of those beaches are found on the magnificent rocky coast…Sand Beach is an exception.

Sand Beach is a great place to swim, sunbath, and even watch the stars. In fact, Acadia’s National Park Service has a couple night time stargazing events here; it can be romantic at night. In fact, you might recognize Sand Beach because it was featured in the movie Cider House Rules. It’s the place where Homer (Tobey Maguire) and Candy (Charlize Theron) have sex.  Though Sand Beach was beautiful in the movie, the scene really was about Homer and Candy, so the full richness of the beach was lost.

Sand Beach is flanked by Great Head Trail on one side and the Ocean Path, along the Park Loop Road, on the other side. It’s Joseph’s favorite for two reasons: (1) it’s beautiful and (2) it’s long but not difficult, so it’s a good one to do for a first hike of vacation.

Because it’s so popular, sometimes it gets really crowded. Not the whole way, but maybe for the first mile. Sometimes I would find myself walking on the road to get around families, groups or strollers, it’s not my idea of a hike. So, over time, Joseph and I have learned that the Ocean Path is a a good one for later in the day. We usually start it around 4:30-5pm.

It’s a little bit of an uphill climb from the parking area to the hiking path. However, once on the trail, there’s beauty on every single part of the 2.2 mile path. This is the famous Thunder Hole where, when the right wave rolls into the granite hole, it sounds like thunder; it can be heard for about a half-mile. It’s a popular tourist attraction, probably because it’s easy to get to from the road. But, in my opinion, it’s a tiny part of the beauty found on the the Ocean Path.

Hikers can take small side paths but we usually don’t. And, as the hike progresses, the way down gets steeper and steeper. Of course there are ropes on the ocean side of the path but they won’t do much if you lose your footing – so you want to be paying attention. That’s fairly standard anywhere in Acadia National Park. A few years ago a couple people lost their lives at Thunder Hole because they didn’t believe the warning signs about the danger of post-hurricane waves. The park service does its best to protect people, but there’s just so much that can be done without ruining the landscape and seascape.

And I don’t want the landscape tampered with any more than necessary! The magnificence of the rocky coast line along the path is so stunningly beautiful that it fills me up, heart and soul. I love looking down the path toward the Otter Cliffs, back toward Sand Beach, and out to the miles and miles of ocean.

There are three “tests” (as Joseph calls them) – sections where we are climbing over granite boulders and or down granite stairs. He likes to announce them as we do them. “That’s the first one,” or “we made it over the last one…” It makes me laugh every time because they really aren’t that big a deal – nothing like what’s on some of the other trails. But Joseph makes goals out of them…and I guess it makes him happy to be achieving something. It must be part of his competitive nature!

Because we take this hike so late in the day, the sun is just starting set when we get to the Otter Cliffs. We often bring a snack or lunch and some water and watch people climbing out on the cliffs for pictures. This year there was a mini entourage of photographers. They were doing a photo shoot with a young woman. I didn’t get the feeling that it was for a magazine cover but more like someone getting her professional photos done, maybe for a modeling interview.

However, this year we didn’t linger at Otter Cliffs. Nature called and my motivation for getting to the end was to use the outhouse at the Otter Cliff parking area. But there was none. So we had to hightail it back to Thunder Hole – a little over a mile – to find one. Yes, I could have gone in the woods, but with so many people on the Park Look Road, there was no privacy. So Joseph and I headed back.

One of the really neat parts of walking back at sunset is seeing the sky strewn with the pink and gold striations of sunset’s afterglow. There is usually a peacefulness and beauty that happens at sunset, but when it’s here in Acadia, it’s something really special.

Take a look at this website for more pics: Acadia Magic

Stay tuned for my Upcoming Classes to help you BE MORE, DO MORE and HAVE MORE of the life you LOVE TO LIVE. Find details on the Victorious Woman Project EVENTS page!