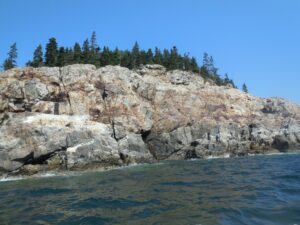 Today we had the pleasure of tooling around Somes Sound at the invitation of friends Peter and Joan. They have a summer home here and take their boat out a few times a week. When we are up, we get to go with them.

We took off from Northeast Harbor around noon with Captain Rowan at the helm. Rowan is a new college graduate and son of a captain. He’s a good-looking guy who, in spite of his age, is super-capable of handing boats and ships far bigger than the one we were on…so I felt really safe. He wasn’t as chatty as the captain Peter hired last year. She was a midlife woman, a seasoned captain and was so into the geology of the area that it was like taking a class in earth science, except that she made it fun and interesting. I learned so much from her about the mountains and the rock formations.

As a writer, I’m generally curious about how things come about, physically, socially, personally. However, when it comes to how the earth beneath my feet formed and developed, and I’m right there seeing the geology as it’s being explained, I’m totally engaged.

Also, in our culture of instant everything, understanding how long it takes for this rock to form or that cliff to wear down, I think it puts a lot of life into an interesting perspective – like that old (but true) thought about my life – anyone’s life – being just a speck in the continuum of time.

As we made our way around the sound, I couldn’t have been happier. It was a gorgeous day, the sun danced on the water and the seals were playful!

As we traveled around, we saw different parts of Acadia National Park, Seal Island, and a lot of small islands that I’d never heard of…many private islands, owned by one person with one house. But, frankly, there’s a lot of money in this part of the island…Martha Stewart, the Walmart, Campbell Soup, and DuPont families…to name just a few. The houses are amazing and worth millions of dollars.

Acadia National Park was a thought just over 100 years ago. Charles Eliot got the idea and enlisted the help of George Dorr (the “father of Acadia National Park). Eliot kept a diary of the process and it’s pretty interesting. Much like how things are done today, it took a ton of politicking that to get President Woodrow Wilson to give it the thumbs up. It had a couple different names but on January 19, 1929, when it was renamed to Acadia. I think it’s interesting that January 19 is also my birthday – but not that year…even my mother was barely born when Acadia was new!

It was in the 1930’s that John D. Rockefeller Jr. brought his wealthy friends to Mt. Desert. They built beautiful summer homes – many of which were destroyed by a fire in 1947. Many of the remaining houses are now bed and breakfasts but some are still used by families (some even passed down from the original owners). Rockefeller also hired landscape architect Beatrix Ferrand to design the carriage roads that I love walking on every year. Those roads go through some of the most beautiful parts of Acadia.  On days when we don’t feel like hiking, we take one of those, which range in length from a couple miles to 11 miles. There are 16 bridges throughout Acadia National Park – each one is a beauty to behold! This picture is of the famous Cobblestone Bridge over the Jordan Stream.