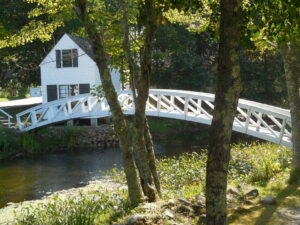 It rained all night last night and most of the morning, so we just lazed around. It’s the only rainy day since we left home a week ago – so I can’t complain about that!

At one point I looked out the picture window and the fog was so strong over the cove that it came up almost to the cottage. If I didn’t know better, I wouldn’t even know there was water outside our window. Then it got closer.  It felt like in just another minute we were going to be wrapped up into some Stephen King novel.  Kind, who is one of Maine’s most famous residents, proobably got some of his descriptively scary ideas from a scene just like this!

And then, like in the blink of an eye, it was gone. Stephen probably sucked it up into his latest bizarre plot J

In early afternoon we headed for the Wendell Gilley Museum in Southwest Harbor. On the way, we stopped in Somesville, a town so tiny that – if you sneeze while driving – you drive right through it. Somesville was the first settlement on Mt. Desert. For years I thought the building next door, which houses the historical society, was the first building in Somesville. Today I learned it isn’t – it was built within the past fifty years but constructed to “match” the other older buildings along the road. 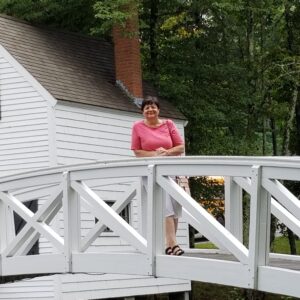 There is a fabulous bridge between the historical society and the Selectman’s house (actually an original from the 1700’s).  I’ve been watching and admiring the bridge for years and always think it’s charming. Today I walked it and, of course, took pix and selfies. It was fun. I’d been wanting to get on that bridge for year.

The tiny selectman’s house was never a residence but always a government building. This year it has an exhibit of stained glass windows from the churches on the island – some of them include Tiffany windows (mostly put in the windows of Holy Redeemer in Bar Harbor). Looking at some of those windows in the churches is really interesting. Many of them are donated by residents, many 100 and 200 years old, usually in honor of someone who died – and their “story” is included on the plaque below the picture. 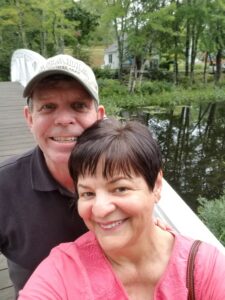 We left Somesville and drove down the road to Wendall Gilley in Southwest Harbor. I’d never been there in all these years but the draw this year was a special exhibit from the Farnsworth. It included art from Jamie Wyeth – my forever artist crush…so, of course, I had to go there.

We met Donna Debs, one of Joseph’s clients, and her spouse, Ray. I’d met Donna before and it was nice to see her and meet Ray…two nice and very energetic people. Donna suggested that we take the time to watch the Wendall Gilley film – and am I glad she did!

I didn’t know much about Wendell Gilley except that he was a famous woodcarver of ducks, owls, and birds. Watching the film, seeing how he used his tools – NO sandpaper, he warned – and the love he put into his work was an amazing look into his soul.

As it turns out, Gilley was a plumber by trade. He started carving in his forties, turned it into a business by accident. One of the “summer people” suggested try to sell his carvings to Abercrombie and Fitch…so he did. Good thing for him. Gilley had to sell his plumbing business in his fifties to keep up with the demand for his carvings. Watching him tell his story – and watching his facial expressions along the way – it was priceless. One story was about his first carving. He made it and gave it to a woman at the Bar Harbor Times. She kept it on her desk for 30 years. Before she retired, and after he became famous, she gave it back to him. She feared that, after she died, someone would think it was a dopey thing and toss it. Apparently, the returned gift became very sentimental for the now old man.

Another story was about how, as a plumber, he would always go into the house of the many of the wealthy summer residents through the back door, always talking to one of the help. Then, after his carvings became famous, he was invited to their houses and, Gilley said, “went in through the front door.”

We left the museum with just enough time to get to the Northeast Library to hear Janny Scott talk about her new book, The Beneficiary. It’s the story of her father, an Ardrossan heir (the famous estate on Philadelphia’s Main Line) as gleaned through his diaries. One of Joseph’s clients is also an Ardrossan heir and still lives on the property, and we’ve been to and through “the big house.” So the stories she told added to the picture Joanie paints.

One of the fascinating things about being there was that probably 2/3 of the room was filled with Main Line millionaires and heirs. The fascination was how much similarity there was in look and gestures. That WASP breeding reeked throughout the room.

Joanie wasn’t there, but Peter was. We talked to him briefly. He’s so sweet and doing incredibly well for a 93-year-old man!!

Ardrossan backed up to the grounds that eventually became The Academy of Notre Dame de Namur (where I went to high school). Peter’s grandfather built “the mansion” around the turn of the 20th century. Peter recalls running around it as a toddler.

Then, in the 1920’s, the Geist family bought it. I didn’t know until around 10 years ago that Mr. Geist moved here from Chicago after marrying one of his servants. I’m guessing she never quite fit into the uber-sophisticated Main Line culture. When Mr. died, and she didn’t want to stay in that huge property, the story I make up is that she thought how cool is would be to, in the heart of the strongly WASP neighborhood, to sell the property to a bunch of Catholic nuns who would turn it into a school for Catholic girls. I can imagine her glee to know that she horrified all the neighbors who were never welcoming to her. 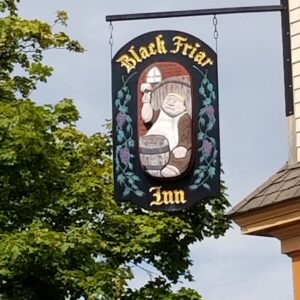 After the book signing, we drove to Bar Harbor to The Black Friar to get something to eat. We learned that the place was sold once again. The new owners are the fourth set of owners since we’ve been going to the bar! The first set were a couple from Drexel Hill, and not far from our first house and almost next to the apartment I was living in when I met Joseph. It was only a B&B then, and the couple sold to a man who opened it to the public for breakfast; it was very good then. Next it became a small bar and started adding small bites. The last owner expanded to include dinner. It’s still a small and cozy place, but now it seats about 30 people.

Joseph and I had a drink and split a hamburger and a Reuben – both were very good. Then we headed back to the cottage to watch the last episodes of season 3 of Broadchurch – a really, really way to end a very full rainy day!