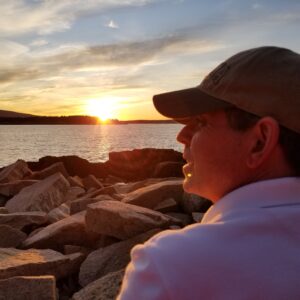 This is one of my favorite days – the Schoodic Peninsula trip. It focused on going to Mass at the tiny but oh-so-charming St. Margaret C hurch on Grindstone Neck in Winter Harbor Maine. Only open for one hour a week during the summer, from Memorial Day to Labor Day. This  Saturday is the last service of the season.

We started the morning with breakfast at The Riverside Café in Ellsworth. My Mexican Benedict was really good and I split it with Joseph, who ordered the frittata – which wasn’t as good…too bland…some hot sauce helped.

Next, we did our laundry and, while it was in the wash, walked across the parking lot to visit the Maine-famous Reny’s department store – a unique store that sells everything from shoes and clothes to food and toys. You can just about anything at Reny’s – and we bought napkins and water.

Once the laundry was finished, we headed north to the Schoodic Peninsula. We drove first to Frazer Point, a peaceful park where Joseph and I once took TaiChi lessons. It’s still one of the prettiest places on Schoodic, though not as famous or as visited as Schoodic Point (and I like that!).

The Point was next, but we didn’t stay there long. We opted instead to poke around Prospect Harbor, where we stayed for 5 years, and the old naval station.

Prospect Harbor is pretty much the same. I couldn’t find the house of Marie and Herb Kunkle, a former acquaintance who first told us about Prospect Harbor. I wondered if it was their house for sale because (1) they’re in their 90’s now and probably not traveling the same as they did 15 years ago and (2) Peter Drinkwater’s sign was pointing to Whitten Road, where their house is. However, I didn’t find the house for sale, and time was starting to get short.

Next, we headed to the old Naval Station and Rockefeller Hall. This place was once a “secret” Naval base where those stationed there got training in things – like cryptology. It was decommissioned about 15 years ago and I’ve driven through the huge property. It was the first time I got to see what’s inside Rockefeller Hall, now a museum honoring the work and service of the military men who served there.

Today it was open, and Joseph and I were excited to go into it. It’s not an extensive museum – maybe because everything was considered secret, but it was interesting enough to jiggle my curiosity about what really went on there – and how it’s impacting my life today.

Because of that stop, we didn’t have time to take one of my favorites – a walk along the prettiest part of the road that follows the ocean, including the beautiful Blueberry Hill.

Instead, we headed into Winter Harbor where we took a few minutes to check in on Peter Drinkwater’s 5&10 – another old-fashioned place that makes me think of what life was like in the 1940’s. Peter also runs a real estate company, and his name is on signs everywhere.

Then it was off to St. Margaret’s where the 4pm mass is – to me – special. The priest who offers the mass is an old guy, a retired school principal, living at St. Joseph’s in Ellsworth. He’s a brash kind of guy and doesn’t stand on ceremony. When he started to process down the aisle, he couldn’t pick a song anybody knew….twice. Finally, he hit on a song everyone knew the tune of, and, with the song books, we could sing. I laughed when he waited for the gifts to be brought to the altar. He checked his watch – and I wondered if he had some dinner arrangement in Ellsworth so he wanted to get through the mass. I was convinced of it when he gave a very short sermon.

After mass we helped close the place up for the winter – something Joseph and I have been doing for several years. The “mover and shaker” of the Saturday Mass is Rose, a school teacher. She made me laugh when she told me she recognized me when she looked up while doing one of the readings. She knew she’d have help closing up.

Surprisingly, after both mass and close-up, we were back in the car before 5pm. Fast! 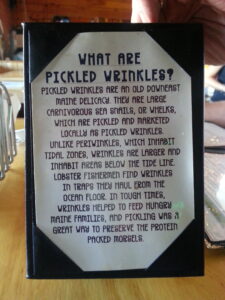 We headed to Birch Harbor and the Pickled Wrinkle for a drink and dinner – Haddock bit appetizers, salad, and pizza. Then it was back to Frazer Point

for sunset. We didn’t actually stay there but, instead, drove down the road and pulled over to catch a beautiful sunset with a pink, swirly-cloud afterglow.

From there we headed back to the cottage, taking the Mud Creek backroad to avoid the holiday traffic in Ellsworth. We had a drink, watched a little tv, and then headed for bed.

Vacation is half over!