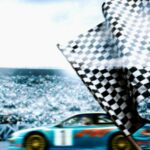 The Daytona 500 is the first big race of the motor racing season and, according to many, the most prestigious. Yet it’s just the beginning. There are over thirty more races coming up in 2013. Danica Patrick has plenty more opportunities for success this year. In fact, in a recent interview, Dale Earnhardt Jr., who placed 2nd at Daytona, said about Patrick, “She’s going to make a lot of history all year long.”At the same time, CrossF

it trainer Christmas Abbott was signed as the only female full-time pit crew member. The thirty-something Abbott has quite a history that includes working in Iraq and owning her own business. But her dream job, the one for which she done her most recent training, has been being part of the NASCAR pit crew.
Except for all the attention to their “firsts”, Patrick and Abbott, are treated like “just one of the boys” without much attention to gender. In 2013, women are easily accepted and respected in racing. NASCAR has come a long, long way.

That wasn’t the case with Janet Guthrie, one of the NASCAR women who paved the way for Danica Patrick. In the 1970’s, Guthrie, a 2006 Victorious Woman Honoree, was ridiculed for wanting to race in the all-male sport. Guthrie detailed her fascinating journey in her 2005 book, A Life at Full Throttle. Read her story (NASCAR’sVictoriousWoman).

Also one of the early women of NASCAR was Kay Presto. Kay was the first female NASCAR writer. With the grace and persistence of another generation, Kay opened doors so that, over time, someone like Christmas Abbott could be seriously considered as part of a pit crew. Read Kay’s story: Kay Presto

As the calendar points to March and Women’s Heritage Month, it’s good to remember the very tough and wonderful women who paved the way for other women, and on whose strong shoulders Danica Patrick and Christmas Abbott can stand…victoriously!