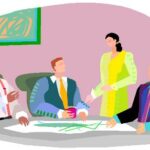 When a woman complains to me about not getting a promotion or recognition for some accomplishment, I ask her how she promotes herself. In most cases, she hasn’t.
So I ask some questions and often find that those women like to stay “under the radar” at work and even socially. When I ask what that means, according to one woman it’s “working without interference or hassles from other people.” Another said she does her job and “doesn’t get noticed for any particular reason, good or bad.” She likes that she can take a few extra minutes at lunch or make non-work-related calls and either nobody notices or nobody cares. Still another described her annoyance with others who talk about every little accomplishment all the time. “I don’t have to shout it out from the top of a mountain,” she explained, “I do my job and do it well, and people should notice without me having to get in their face about it.”
Some women even believe they have more power and influence being the “pebble in the shoe” – they effect change without making noticeable noise. That reminds me of Franny and Nancy. Nancy was the person who stayed under the radar. She was very opinionated, had a certain way of doing things and didn’t like change. Franny was her best friend at work, and her mouthpiece. Nancy was an instigator whose main objective was maintaining the status quo,  She seldom spoke up or expressed her opinions. Instead, she’d have lunch with Franny and get her all riled up. Then Franny would speak out with an often unpopular opinion or off-the-wall idea. Within the group, Franny would argue a point of view while Nancy would quietly stand by, usually saying nothing. Franny seemed like the renegade who always made problems. Nancy got credit for being a deep thinker. Nancy was the influencer but her circle of influence was small…it was only Franny. Could Nancy have been a greater force for good change if she influenced openly?
If you want to live under the radar, it’s your choice. But is that making you happy?
In today’s fast-paced world, it’s hard to pay attention to anyone – sometimes even your kids – unless they make a little noise. The old adage stands: the squeaky wheel gets the grease. You don’t have to be obnoxious about it, but you do have to get in the game.
Poke you head up and give it a go. Yes, above the radar will feel uncomfortable at first. Others might be shocked. But if you have something to say, they might also appreciate it. More importantly, they will see something in you that they hadn’t seen before – something that might be just the quality that is needed for that other job – the one with more money and more power. Expect the missteps but victory up and keep going. You never know whose life might change for the better because you do!