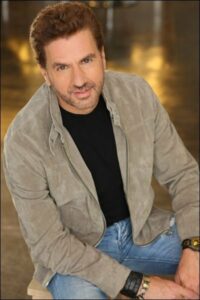 J. Randy Taraborrelli is talking with Annmarie Kelly about his newest book, Frank Sinatra: Behind the Legend

Not only is J. Randy Taraborrelli a respected journalist, he is a recognizable entertainment personality and in-demand guest on many television programs, including Today, Good Morning America, CBS This Morning, Entertainment Tonight and CNN – Headline News. Additionally, he is a news analyst for CBS News; his six-months-plus coverage of the Michael Jackson molestation trial in Santa Maria for that network was widely praised. (He was the only CBS News TV reporter in the court room for the verdict). Taraborrelli co-anchored coverage of Jackson’s funeral with Katie Couric for CBS. the author of 17 books, 13 of which have made the New York Timesbestsellers list, including Call Her Miss Ross, Elizabeth Taylor, Michael Jackson – The Magic, The Madness, The Whole Story (also nominated for a W.H. Smith award in England); and After Camelot – A Personal History of the Kennedy Family, 1968 to the Present.