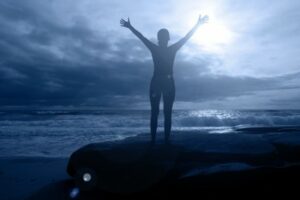 Are you happier now that you’re in midlife?

Most likely you are and don’t even realize it!

Recently a group of Canadian researchers released a study done with about 1500 high school and college students. The researchers followed them from graduation into their thirties and forties. They discovered that, as the students aged, got jobs, married and settled into their lives, they got happier. Being in good health also played a role.

This newer research challenges past research from the 1960’s and 1970’s when the “midlife crisis” first started getting attention. Back then, it was said, that the midlife crisis affected people in the forty to sixty age group, with forty-five being the most common age. The “crisis” lasts longer with men (3-10 years) than women (2-5 years). The researchers findings seemed to explain why men were having affairs and buying sports cars and women were leaving their homes and families to “find themselves.”

Happily, you’ve evolved. In 2016, because you’re living longer, you seem to have an extended youth. “Midlife” doesn’t begin now until your fifties or even your 60’s. Don’t believe it? Ask any 40-something woman about being in midlife any she’ll be shocked at the implication. She still thinks she’s a kid.

Part of that is because your parents are living longer and are being more active and still independent as they age. When you see your parents living a full life, a part of you still feels like you’re the child. Something else is that, during menopause, unlike women of previous generations, you have so many ways to deal with that change. Before you only had the HRT solution. Now your doctor might prescribe everything from physical exercise to bio-identical hormone replacement and even meditation to help you through that change.

Yes, eventually, the same issues creep into your life. Parents need end-of-life care and then die, the kids (finally) leave and the house is empty, when you look into the mirror, you see someone different, and of course, death of a spouse or divorce can be a real kick in the gut. But, unlike your grandparents generation (when you weren’t expected to live much past the retirement age of 65), the average 60 year old woman, 5’4” and 150lbs who is a high school graduate and who includes exercise and a healthy diet and doesn’t drink much (2-7 glasses a day), can expect to live to be 93!

Also, you aren’t immune from experiencing things like depression, loneliness, and dissatisfaction with life or relationships. It’s not like those don’t creep in, but at least with the Victory Chicks, you are more likely to take control and take action.

In fact, in the Victorious Woman Community, it seems like most women, like you, get to midlife and start feeling freer and more empowered. The “good girl” phase of your life is over and now you want to find a kicked-up lifestyle that is more fulfilling, purposeful and satisfying. You are still physically active – walking, yoga, and zumba are your favorites. You have a bucket lists and work on checking those fun things off. You may even be starting, or thinking about starting, you own business.

So, are you happier now than when you were in your teens…and even your 40’s?

Curious about how long you will live? Check this out: How Long Will I Live?