A Nut in a Nutshell 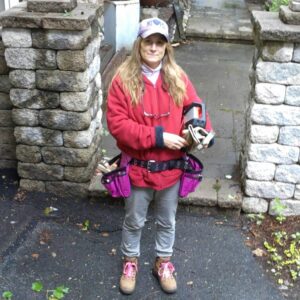 Hello! My name is Diane Lobianco Gabrielli.
I will start my story at the age of twenty-nine. I had recently broken up with someone and was looking forward to being single. I had my own apartment and job. But instead I meet a man named Gabe Gabrielli. I cannot tell a lie. I approached him. He had dark curly hair and was on the shy side. We dated for a month. He was a widow with four- and five-year-old boys. It wasn’t long before all three moved into my apartment. When Julian, the five-year-old, said “Why can’t Diane watch us?” I knew I couldn’t leave these children.
As time went on we moved the the ‘burbs to get the kids in better schools. Years went by. We added baby #1, Adrian, after two years; he’s now eighteen. Then later #2, Brendan, now sixteen, and #3 Estella, now fourteen.
I’m sad to say my husband Gabe starting drinking, and the drugs followed soon after. It consumed his life. Sad but true. I knew I had to come up with a plan. I talked to anyone who would listen to me. Finally it led me to a women’s resource center, which directed me to the New Choices, New Options program at Delaware County Community College. This is a wonderful program–it’s all in the name. I was profiled by counsellors who suggested many different kinds of careers, including non-traditional ones.
I chose carpentry, one of the only fields with equal pay for women. But school work and time commitment soon made home life out of control. I’m hustling on the side to pay bills while still in school. A friend drove me to food banks as my car had been repossessed . This was what I call a few years of hell. But my kids ate and were taken care of as I continued school.
I guess you could say enough was finally enough and I threw Gabe out. I had no job and no money but it was affecting my children. I keep all five children,of course,when he left.
As time went on I’m doing whatever a mom needs to do to pay rent, supply food and love my kids in between running around like a headless chicken.
I still had a few years of school left and was far from getting any good job. Well, the crap hit the fan. Finally all resources of mine, gone! What do I do now?
My son had made a friend in first grade, Josh. His mom was a caring, loving, patient, and peaceful woman. I admired her and dreamed like being like her even though I was so opposite from all my life’s craziness. I screamed out and everything and everyone in my life.
But she was always sweet to me and one day took me to her church, Church of the Savior. I told them my story–they were so wonderfully compassionate. And they
wrote me a check for $2,500.00 to pay my bills and take care of the kids. What a wonderful miracle from God. Thank you again,Lord! and Nancy and church.
I continued school and finally had some relief.
A few months later, the three younger kids and I were watching television. The older boys were most likely at school.
And BOOM! News flash on Channel 29: found murdered, Gabe Gabrielli. There’s a huge picture of my husband on screen. My heart sank. Adrian, who was eight, was old enough to understand.
The days after were dark and sad as we said good by to their father whom they had barely seen the last few years of his life.
But on to the future. I have a small tribe to lead. Carpentry choice for a trade was a good one as now I’ll have to be half mom and half dad. Luckily I had a life insurance policy, purchased on the advice of my sister, Susan, years before. With five kids, she said, you had better be prepared. With the money, I bought a house near this wonderful church, and a big red truck.
Now moving forward again, I did complete school, but getting a job is a whole new case. A woman in a man’s field wanting to be taken seriously is still hard. Help me, Lord!
So finally, as a last resort I volunteered at a local mill shop, five days a week, eight hours a day. I was the go-fer, go for this go for that. But unfortunately, they attempted to teach me very little. During this time, however, a gentleman, Thomas Traun, came in and said hello and we talked. A month later he came back and said, “I’ll pay you $10 an hour to work for me.” I ran out of that place fast. Here I am nine and a half years later still working with Tom. ( got a few raises ) It’s been challenging, but after all these years I’m finally confident in what I do. I do a lot of tiny small jobs others will touch. I was once a small job myself!
I meet the most wonderful people and my list for woman friends since I started this part of my life has grown so immensely. We have tea, we fix stuff. But as with my older clients, we just love on one another and they feed me a lot of wonderful food!
Thank you, Lord! New Choices New Options program! And Delaware County Community College for pushing me through the program in the face of not thinking I was good enough! Because by the grace of God we all are good enough.
Thank you for reading my story, Victorious Woman Project.