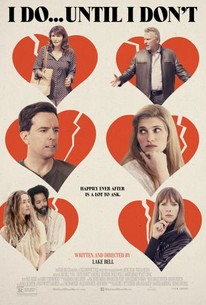 I Do…Until I Don’t is the new movie written and directed by Lake Bell. She also stars in the movie. In it, a documentary film-maker has become jaded by thoughts of traditional marriage. She thinks it’s outdated [and she’s correct!]. Instead, she thinks marriage should last seven years with an option to renew.

The film-maker sets out to prove her point. She studies the relationships of three couples, of different ages, to see what happens. Bell and her spouse (Ed Helm) are one of three couples.

The movie itself didn’t get great reviews. Rotten Tomatoes only gave it one-and-a-half starts. Some of the commentary indicate that it missed it’s mark with reviews that said, “not much authenticity or insight into contemporary relationships,” and “like an R-rated episode of the cheesy anthology series “Love American Style.”

Personally, I’m disappointed. I was hoping that the movie would go blockbuster and people would start to see marriage in “chunks” instead of a life sentence. That’s how in should be!

In this modern age, with people living longer and nobody wanting to commit to things like long-term cellphone or cable contracts, it isn’t logical to think something as important as marriage could go on and on based on the dreams of a young couple who have no clue.

The Five-Year Marriage™ is the answer. It gives couples the time and space to live their lives and make adjustments through their five-year contract.

The Five-Year Marriage™ is launching on February 14. You can get your copy now.

Topics and articles that are worthy of sharing. Sometimes this is related to pop culture, celebrities, science, politics or local news