This morning I saw Ollie and asked about his openings before and after our two weeks – thinking maybe we can add another week in 2020. I think what’s happened is that Joseph and I have certain hikes we like to do every year. And then there are new hikes we want to explore and things that pop up (like the Design House and the FlashInThePan musicians).  So, when new things come up – and some are just here for the season, or less – we pass on some “standards” to make space for the new. Then we miss the old ones. So maybe we need three weeks…

Today we did our most ambitious hike yet – the Ocean Path. It’s Joseph’s favorite. The path starts at Sand Beach, for almost two miles. It mostly follows the Park Loop Road, meanders through a forest and above the shoreline – for fabulous views all the way. It ends at the Otter Cliffs, where Joseph and I usually stop for water and a snack before heading back.

It’s not a hard hike, but it is tedious in spots and does require some climbing over boulders. And it’s long – for almost two miles each way.

Because it’s so pretty, it’s popular with many visitors with kids and the cruise people – at least for about ¾ of a mile to Thunder Hole. So it’s very crowded and not too pleasance. So for the past few years, we’ve been doing this in late afternoon. We usually get to Otter Cliffs around sunset and return in the afterglow. 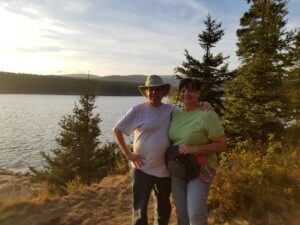 This year we changed it up and decided to go in the early morning. It was a little crowded – we got the last parking lot parking space. By the return trip, the last leg before returning to the car was crowded with a lot of cruise people. By then, for us, it wasn’t bad – especially since all Joseph and I wanted by then was food and rest.

We headed into Bar Harbor and we were too late for breakfast. So we ended up going to Mother’s Kitchen and getting a Grandpa Jack sandwich (meatloaf on sourdough bread). When we ordered, I could tell Joseph was starving and ordered a scone, a brownie, and two cookies. I presumed they were for dessert, but he ate them on picnic benches while waiting for our food. He didn’t eat alone either – the fruit and nuts we had on the Ocean Path didn’t fill either of us up. Happily for me, I didn’t much like either the scone or the brownie, so I just tasted them and split the cookies – some of the best ones I’ve had in a long time! Sascha does a fabulous business in the little shack, and for good reason. Her cooking is some of the best on the island.

After lunch we just relaxed, delving into our second binge-watch of vacation, Big Little Lies. I wasn’t sure if we’d like it, but as Joseph said, it’s “intriguing.”

We left at 6 to pick up Ollie for dinner. We headed into Ellsworth and Finn’s. I had the Fish and Chips, and we split a slice of blueberry pie for dessert. Both good, but spending time with Ollie is special.

Ollie’s new friend, whom he met on a Road Scholar trip, is coming into town. I was hoping to meet her, but she’s coming in on Friday night. We’re leaving Friday afternoon and will be in Amesbury MA on Friday night.

We asked Ollie if it was a “serious” relationship. He seems to like it the way it is because he has someone to talk to and travel with and that’s good for him at this point. He doesn’t want to move to CA and she’s not moving to ME. So this seems to be working for both of them.

Something else Ollie told us the other night. She’s the same age as he is. That makes a  difference – and for a reason, I’d never considered. He said that “when you’ve sat next to the bed and held your wife’s hand while she was dying…” Since he’s done that twice, he has no interest in doing it a third time. I guess that makes sense to want to be with someone who will outlive you.

The other thing he said, something his brother told him, and the reason he’s doing so much travel in the off-season: “There isn’t much time between ‘I can’ and ‘I can’t’.” Something for Joseph and I to consider!

We got back to the cottage and watched two more episodes of Big Little Lies. We’d been discussing where we would have our last MDI dinner and decided on Red Sky in Southwest Harbor. I was a favorite of Susan Howard but we’ve never been. Susan died unexpectedly at the end of last year. She was on our mind this year. Joseph made a reservation for Thursday at 8. Then we headed for bed.