Today is our last full day in Maine. That means two things: The last hike and the “special” dinner.

For the hike we chose my favorite: The Jordan Pond. This one travels the entire 3.5 miles shoreline of the Jordan Pond. Joseph and I usually start on right (western) side because it’s a little tedious – easier to do when we have more energy. It starts like a nice walk along the shore but then the “boardwalk” starts. The boardwalk (two or three side-by-side planks) is designed to keep walkers off the marshy sections and preserve the ecology. A few years ago the boardwalk was relatively short and fairly low to the ground. Now the boardwalk is longer and higher. As a result, the hiker’s focus in on not falling off the boardwalk instead of enjoying the amazing scenery.

This year the boardwalk ended with a sign that goes away from the pond and into the forest for a considerable distance. So, for about 10 minutes, we walked on soft needles and over tree roots. Then we were back on the path – just in time for the boulders. I think Joseph really likes this part the most. It’s a challenging trek over the huge boulders. 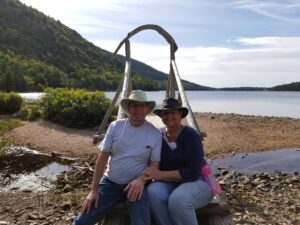 This year we watched a guy leapfrogging from boulder to boulder to get to one that was like an island in the water – all for a good photo. His friends were harassing him for doing it and he was teasing them into joining him – they weren’t buying it.

I jumped into the conversation, telling him I thought he was impressive. His friends laughed and one of them said, “Yeah – stick around to see how he gets back!” I laughed and responded, “I think I will because I’m wondering how he’s doing it!”

The guys took their friend’s picture and, amazingly, he leapfrogged back to shore. One thing I was thinking is that, as he got to the last one on the shoreline, all his guys stood in place and watched. Not one of the guys moved. If it was girls, I think they’d be there to catch her – just in case. I thought it was curiously funny.

A little later we met a couple, about our age, who was walking the opposite way from us. They wanted to know if there was a trail that would enable them hike up to the carriage road above and avoid the boulders and boardwalk. As far as we know, there isn’t.

That’s one of the things about hiking here (and, I guess, anywhere). You can get lost or make a mistake and then you’re stuck. We’ve done it. Once we took a wrong path that ended up at a different parking lot. Another time we unexpectedly took a path that ended up going to Dorr Mt – the 2nd highest in the park. That wasn’t the bad part. The bad part was that we didn’t go back the same way and ended up on a path that we weren’t sure was a path. It was late in the day and I was scared that the sun would set and we would be lost in the park…and stuck there overnight.

Stuff happens on hiking trails and there is often no cell service. Hiking is not for the faint of heart!

I don’t know what happened to them but Joseph and I continued on the path. The second half of the path is a well-traveled flat walk on a gravel path. The views of the pond – especially during the days when the sun is shining brightly. During those days and during midday hours, the sun dances on the pond creating the most amazingly beautiful picture.

The hike took us about 2 hours. When it was over, we broke from precedent. Joseph and I usually get popovers at Jordan Pond House, but it was too crowded. Instead, we drove to the Asticou Inn in Northeast Harbor. A half-sandwich and 2 popovers later, we drove back to the cottage. When we got there, first we took a little time to clean out the kitchen cabinets, the first step in our packing-to-go-home process.

Our dinner reservations weren’t until 8, so we watched some TV. Actually, I found a copy of Must Watch Dogs in the cottage office. Knowing how that is one of the most hated romantic movies, I watched try to figure out why. I couldn’t. The script is dopey, but the performances are good. And I like John Cusack. So it wasn’t an Academy Award winner, but it was a cute movie featuring actual older people who are dating and dealing with previously married angst.

Our “last night” dinner was at Red Sky in Southwest Harbor. They were having staffing issues (a common problem here) but did their best to accommodate and serve us. As a result, we were understanding and patient. We had a good table and had plenty to talk about while waiting for someone to take our drink order: Joseph got a beer and I had a limoncello something – good but a little too sweet for a second one.

Joseph had seak and I had peekytoe crabcakes – which were mostly crab and perfectly seasoned; they were totally worth the cost. So was the vanilla and peach cake I had for dessert – glad I ordered that instead of the gingerbread cake Joseph got.