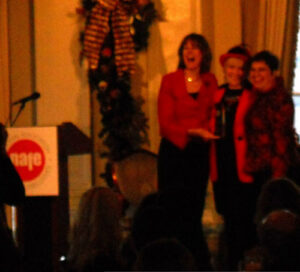 I just returned from a wonderful day in the Big Apple where I attended the NAFE Women of Excellence Award breakfast. Carol Evans, CEO of NAFE and President of Working Mother Media, was there and, about the Women of Excellence, emphasized its purpose, “Women standing up for women–that is what this award is all about.”

A room filled with accomplished and amazing women

I wish you could have been there, in a room filled with accomplished and amazing women. One of them was Dr. Betty Spence, President of NAFE, who started the excitement with her opening line, “When I’m in the room with NAFE women, it’s like being inflated with the helium of hope.” And that’s what the energy felt like – exciting, hope-filled, action-oriented!

And all of that excitement was just the tip of the iceberg.

I was there because one of my mentors, Robbie Motter, flew in from CA because her friend and mine, June Davidson, was being honored as the recipient of the NAFE Ace award. Robbie and June are two of the sharpest and most savvy women I know. Both display feminine leadership in the most artful way. They are connectors, mentors and so much more. June, the founder of American Seminar Leaders (just one of her many, many accomplishments) has an amazing ability for training and marketing.

The indomitable Robbie is the southern California and mid-Atlantic director of NAFE. She just turned 75, recently had a breast removed and still managed to fly across country to SHOW UP! (Robbie’s signature phrase) for her friend, June, and her NAFE colleagues.Both women have helped so many other women launch their careers and, even as I write this, I know Robbie and June are both avidly creating more opportunities for themselves and others. We should all have such energy, grace, purpose and pizazz in our golden years.

Afterward we were later treated to lunch by NAFE president, Betty Spence, compliments of Robbie. When Robbie first invited me, in the lobby of The Yale Club, I told her I didn’t want to impose on Betty’s offer. Cheez, did I get “the look” from Robbie, who reminded me, in her own mentoring way, that wonderful things can happen – but first you have to SHOW UP! So I thought about it for a while and when Robbie came back to me with her “So..what have you decided…” – again with “the look” I put my discomfort away and went to lunch. at one of the restaurants in Grand Central Station.And Robbie was right! I showed up and got way more good than I could have imagined!!

When we talk about women and leadership, as women we need to remember that there is a masculine and a feminine version of leadership. June Davidson is as flirty and sassy as they come; Robbie was wearing a tiara and boa feathers when I first saw her. Neither woman is anything like what we think of as the masculine version of leadership, but both of them get more business done and have more fun in a day than most of us do in a week – and they do it while ushering many other women into their own level of feminine leadership!

Another of Robbie’s proteges was at the awards. I “met” Darlene Tarnoski on the phone when, thanks to Robbie, I had the pleasure of interviewing her about her project for taking care of yound runaways. Today I met her in person. She’s every bit as wonderful as I would have expected her to be. She traveled to NYC with her daughter – and wow! Mother and daughter were having the time of their life!! You can read about Darlene’s self-esteem building project below.

What a day it was – worth every bit of the effort of getting up at 4:30 so I could be at the 8am breakfast and celebration!!! And thanks to my spouse, Joseph, who not only joined me but really let all of us know that he was supportive of our style of leadership.

FYI: Robbie, June and Darlene have each been Victorious Woman Honorees, and each for every different kinds of victories. You can read more about each other them:
VictoriousWoman.May2008.RobbieMotter
June Davidson
Darlene Tarnoski
Read more about the NAFE Women of Excellence Awards and its recipients: https://bit.ly/vYQ4cS