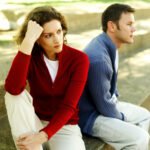 Is Infidelity The Norm?

Former Senator John Edwards’ trial started today. Edwards is accused of violating federal campaign finance laws using campaign monies to fund and keep secret an affair with his mistress, Reille Hunter. Some of the evidence looks pretty damning but who knows if a crime was committed – that can be sorted out during the trial. What I’m wondering about is the encounter I had with a lady at last year’s Italian-American Festival in Media PA.
It was a warm June day and, as a local author with Italian-American heritage, I was invited to do a book signing. I shared a table with the congenial author George Anastasia whose books and TV spots about the Italian mob in the Philadelphia area are so popular. We were having a good day when, in mid-afternoon, a well-dressed, pleasant-looking woman stopped by my table and excitedly began talking about my first book, Victorious Woman, which was displayed.
At first, though she was smiling and full of energy, I couldn’t quite understand what she was saying. She was talking fast, was on a roll and getting some attention from others standing nearby. Then I got her main point: women should be submissive to their husbands as the head of the house, as God intended. It wasn’t the first time Victorious Woman and I were used to give someone a platform to sermonize. She continued, and in a conspicuously loud voice, declared, “That’s why men cheat. If wives would stay home and take care of their husbands the way they should, all these men wouldn’t be cheating because they wouldn’t be tempted to look for women outside their marriages.”
As she took a breath, obviously pleased with herself, I quickly replied, “I don’t think Elizabeth Edwards would have agreed with you,” which was enough to (momentarily) halt the woman’s rant. “She did exactly that,” I went on. “She was an educated woman, an attorney, who stayed home, raised her children and supported her spouse’s ambitions. In return for her loyalty, John Edwards publicly used his marital relationship to promote his ‘good-as-gold’ image while, at the same time, he was privately getting busy with another woman.”
Though my words slowed the woman down, they didn’t stop her. When she finally walked away, table buddy George looked over at me and laughed. I wondered how many “Carmella Soprano” stay-at-home wives and mothers he’d come across in his mob research? And in Victorious Woman, Pattie Painter told about how her first spouse had an affair throughout most of their fourteen year marriage, during which he fathered three children with Pattie and she stayed home with them.
That attitude boggles my mind. How many women think that staying home is an insurance policy against their spouse having an extramarital affair? What do you think?
For a brief Edwards timeline: https://abcn.ws/iukhYi
Tell Your Story: Victorious Woman Contest  https://ow.ly/a6Qym
Join me: