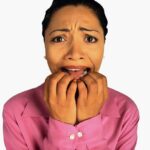 Public speaking is the Number One fear for many people. But in this day and age, in spite of all the benefits of social media, how you present yourself in person can make or break your career. Whether it’s during a job interview, a department meeting or a presentation to your whole company or your board of directors, when it’s your time to speak up, do you get butterflies so bad that you feel like you could die?

I know how you feel. It used to be that way for me too. Sometimes it still is.

That’s why I was so touched last week after the Women’s Expo at the Edgmont Country Club. I was one of the lunchtime keynote speakers, along with Jen Frederick from Fox 29 (she was fabulous!). Afterward I was tickled by the feedback of so many women who thanked me for the inspiration they got from my message. But it’s another woman who been sticking in my mind since then.

Is Public Speaking a “Gift”?

The lovely thirty-something woman told me how much she admired people who could speak in front of a group. She considered that ability a “gift” – one she didn’t get but wishes she had. I laughed and confessed that there was a day when I couldn’t speak in front of more than two people without shaking. She didn’t believe it, but I know it’s truer than I like to admit.

Public Speaking is a Learned Skill

For me, speaking in public has been a learned skill. I assured her that if I can learn to speak in public, she could too – and so can you. Here’s what you need to know:

For starters, when putting your talk together, go to your local library and get one of the many great books about speech organization. It should tell you to start with a message or main idea. Next, develop an outline around three main points that support that message/idea, including references and examples, and have a clear beginning, middle and end. Those are the mechanics – all good and important for preparing a good presentation.

Next,  you get down to the nitty gritty – the “other stuff” that every “I would rather die than speak in public” presenter MUST get a handle on:

Focus on The Benefit You’re Giving Your Audience

However, one day when he was prepping for a seminar, I asked him, “What do you think about before you speak?” He said something that amazed me, “I focus on the fact that I’m telling them something they probably don’t know and, once they know it, it will help them have a better life. That makes me excited, and I center my thoughts on that excitement.” I laughed and thought, “What a concept!” In my head, while I knew I was giving my audience new information that would improve their lives, I focused on whether they would like it/accept it/like me, etc. I never thought about getting excited for them. That was big for me, and I hope it is for you too.

Focus on Helping, Not Being Judged

Next time you speak, instead of worrying about what “they” are thinking, focus your mind on how you are helping them and how much they will appreciate your help. Try it – it can change things dramatically for you!

Finally, get out and speak. The best way to get over the fear of speaking in public is to do it. One of the best places to practice speaking in a safe and supportive place is Toastmasters. Find a local club and join – you won’t regret it!