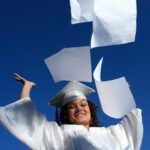 Congresswoman Kristi Noem of South Dakota just earned her college degree in Political Science. According to her website, the forty-year-old is a rancher, who “actively farmed with her family for 17 years, owned and operated a hunting operation, and helped manage the family restaurant.” She left college in her twenties due to a family tragedy. She didn’t go back until a couple years ago, after she was already successful.

Here’s the inspiration you can take from Noem’s acheivement:

What makes Noem’s achievement important is, even though way past college age, she decided the degree meant something. So she put in the effort and got it done. From my own experience I can tell you it’s a challenge. But when it’s done, it’s something that no one can take away from me – ever. Decision leads the charge and persistent effort wins the day.

Whether you want an undergraduate degree, an advanced degree, your own business or something else, if it’s important enough to you, you’ll find a way to do it.

2 – You can be a success without a college degree.

Statistically speaking, those with college degrees earn more money over the life of their career than those who don’t have a college degree. However, I know plenty of women who don’t have a degree, but have very successful businesses. I also know too many college grads (especially these days) who can’t find a job. Even more common are those whose career has nothing to do with their college major.

What does make a difference is commitment and hard work. And, if something isn’t working, having the willingness to look at what’s holding you back and changing it.

3 – Life’s obstacles may delay a goal, but don’t have to deny it.

How many times has life thrown you a curveball? If you’re like most people, it’s happened a lot, and probably with regularity. Sometimes it’s a minor inconvenience, but other times it’s something really big: a car accident, a serious or chronic illness, a spouse passing away unexpectedly, suddenly finding out you’re the only sibling willing to care for your aging parent.

And that’s where victory comes into play. Victory is what happens when you do something that pushes you forward and during which you have to stretch out of your comfort zone – like returning to school with a bunch of twenty-somethings when you are old enough to be their mother.

Congresswoman Noem’s college degree is a easily a goal achieved. But it’s so much more. By the time summer gets here, the work will be a memory and she’ll be able to move getting her degree to the “done” column. But what it took for her to do it – her victory – will last forever!

Whatever you do, achieving a goal pales in comparison to the victory stretch you made to get there. Goals come and go, but victory lasts forever!