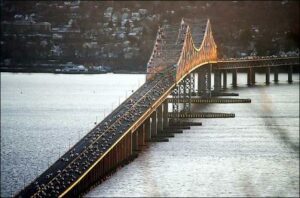 Incompetence could have gotten me, my spouse or someone else killed

Here’s what happened:
About three hours into my vacation, on the drive up the east coast to Maine, I was crossing New York’s Tappen Zee Bridge. All of a sudden, the clutch on my year-old Chevy Cruze blew. Joseph and I were lucky that the bridge people came quickly and (though it scared the stuffing out of me) safely pushed us and the car across the bridge and three lanes of traffic. Then I had my car towed to the nearest Chevy dealer.

Once there, the serviceman said they wouldn’t be able to  “diagnose” the problem for at least five days.  So Joseph and I rented a car and went to Maine.  It wasn’t a good start for a vacation, but we made the best of it.

While I was away, I called several times, and always got the “we’re doing it tomorrow” line. Two weeks later, as I was leaving Maine on a Friday morning, I called to make sure the car would be ready when I got there; it still wasn’t fixed. But, long story short,  I picked up my car on Saturday afternoon.

About an hour and a half later, between the dealership problems and driving through torrential rains, I needed a break and some comfort food. So Joseph found a Cracker Barrel nearby and it was right off the interstate.  As I got off the exit ramp and turned into the a side street, my taste buds were already craving those cheesy hashbrowns and fried apples.

Then I came up to a stop sign and attempted to stop…and that’s when I lost my brakes.

I can’t describe all of what happened over the next few hours but my car was towed to another Chevy dealer and Joseph’s brother and fiance picked us up. All I can say now is how thankful I am to them, and most especially to God that the brakes failed when I was driving only about 15mph instead of the 65 mph I’d been driving only moments before.
Yesterday I heard from the NJ dealer. He said that problem was apparently caused because, during the clutch repair, a piece broke. Instead of ordering a new one, the other technician glued the part together and used it.

Incompetence to the nth degree!!

If my brakes had failed on the interstate, I and other innocent people could have lost our lives, or at best, had our lives ruined. Apparently the incompetent Chevy technician could have cared less.

Competence is important. Your job might not have the potential for creating life-threatening situations. But did you ever consider what not being competent in your job could mean? Does incompetence in your job mean missed deadlines or lost time or lost money? Does incompetence result in hurt feelings, broken relationships, or a stressed department?

Doing the job right, and doing the right job, is what competence is about. The New York Chevy dealer failed the competence test.  On the other hand, Flemington Chevrolet performed competently both technically and in its customer service.

What about your work? What do you need to do in your job to be more competent?