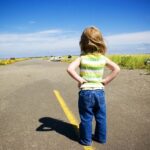 Do you have a vision for your future? Does even thinking about your vision make you feel nervous or intimidated? If it does, you aren’t alone! I can tell you about 80% of the women I talk to and work with feel the same way.

Why? There could be many reasons for that but here are three common ones:

1 – You don’t even know what you really want.

Women in my Vision Board and Optimal Living Success Workshops often come to the first class and jokingly say, “I don’t know what I want to be when I grow up.” If you say the same thing, I suggest you do some Eat-Pray-Love kind of soul-searching. Sometimes you don’t know because you’ve pushed down your desires for so long that you can’t even remember what they are.

Carol did that in her last years of college when she “got serious” about what she would do when she graduated. She majored in accounting and followed college with a thirty year career that took her around the world. But when she settled into her fifties, and after the death of a friend, she decided she didn’t want the stress anymore. She dug into her past so she could remember the things she loved as a teenager and in college. As a result, she left her job and started her own business. She still has plenty of stress, but it’s the positive kind, and she chooses it. Today she’s energized and excited about life again. Are you?

2 – You can’t have what you really want.

Or maybe you think you don’t deserve it. Sometimes that comes from a fear of failure and sometimes it results from the thoughtless opinions of others in your life, maybe even from your childhood. Still other times it stems from the guilt others put on you about being selfish for having your own goals.
In Victorious Woman! I talk about Annie, a charming woman in her late fifties, who wanted to open a bridal salon. She had a vision but family and friends and everyone around her, told her she was crazy to think about such a thing. She abandoned the idea – but she told me that she never lost the desire. She died from cancer, at 62, mourning for her lost dream even in her last days.

3 – You have dueling goals – and sometimes they aren’t yours.

Maybe there are real conflicts or maybe you think too much about your life vision in terms of your family and friends. I’ve often talked to women who willingly adjust their goals to accommodate their kids, spouse or parents. Or, (for better or worse) maybe you’ve been living out your desires through others.

That’s what Helen was doing. She really wanted to move to New Mexico. But she was also waiting for her daughter to get married and have children. The idea of being a grandmother was as appealing to Helen as living in a warmer climate. Here’s the rub: her daughter was on a career track, following her passion (as encouraged by her doting mom) and not interested in making babies; she wasn’t even dating anyone.

So not only was Helen cheating herself, she was creating stress in her relationship with her daughter who really felt pressured by her mother’s frequent comments about becoming a grandmother.

All the while Helen could have been embracing a goal that would make her happy in the present, knowing she could change her mind in the future.

Whatever your excuse for not having a vision for your future was up until now, LET IT GO. Take advantage of this moment in time to envision a future that makes you feel happy, satisfied and that pulls you up and forward into a bigger and better life. Here are a few tips that will help you:

Once you have some ideas, create a Vision Board around a single “most wanted” or around your top three or five most wanteds. And have fun doing it. You can even have a Vision Board party with your friends. Some poster board, magazine and wine combined with good friends and laughter can be pretty powerful!
Victory On!
Annmarie

The Victorious Woman Project wants to get you jazzed up and ready to build your vision for the New Year.
Play with Pinterest – take the Pinterest Victory Challenge.