Victories come in all shapes and sizes.

Most of them aren’t earth-shattering but they lead to those that are, either by boosting your confidence or proving something to yourself. Like learning to fold fitted sheets.

For my entire adult life, that “skill” was something that eluded me. I just couldn’t figure it out (and, yes, I watched the online videos – they didn’t help). That I couldn’t annoyed me to no end! So did those crumpled fitted sheets that took up way more space in my closet than I wanted.

But I wasn’t giving up!

One summer, my desire even took on the look and feel of stalking. At least that’s what the woman in the Bar Harbor laundromat seemed to think.

It was the halfway point in my vacation and my spouse, Joseph, and I were doing laundry. As I waited for my clothes to dry, having nothing much else to do, I was people-watching. One woman took a whole load of sheets out of the dryer. One by one she folded her fitted sheets. She did it, perfectly, and in seconds. Had Martha Stewart herself, whose Maine “cottage” is on the island and not far from the laundromat, given fitted sheet folding lessons at the local library?

I was so jealous! In fact, compared to her fitted sheet folding skills, if she’d told me she just had a fifty-pound weight loss, I wouldn’t have asked her how she dropped the weight. Instead, I would have said, “Big deal. Just tell me how you folded that sheet.”

By the third fitted sheet, I couldn’t contain myself any longer. She’d noticed me watching and was already getting squirrely. So I went over to her folding table and asked her how she did it. I don’t think my question did anything to quell her concerns about her safety. I think she thought I was nuts. She quickly picked up her laundry and left.

I was disappointed. I thought, in the spirit of sisterhood, she would have shared the secret to the skill that seemed so elusive. But no…I left Maine that year and still couldn’t fold a fitted sheet. I felt like something was missing…

That is, until 2015. I bought a set of Martha Stewart sheets. Maybe I thought if I bought Martha sheets, I’d fold like Martha.It was worth a shot.
As I got them ready to wash (yes, I wash new sheets before I use them) I unfolded them on the floor. And, eureka! That’s when it happened!! 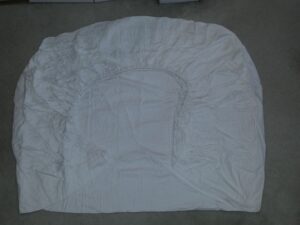 The folded fitted sheet on the floor in front of me clearly showed the perfect fold! The sheet was folded in half, top to bottom, with the bottom corners tucked into the top ones. And, when they were tucked in, they laid perfectly FLAT! SO SIMPLE…why couldn’t I figure that out before??

After that, all that was left was folding the sides one over the other (like a crepe). Then, one more top-to-bottom fold and voila! Flat sheets 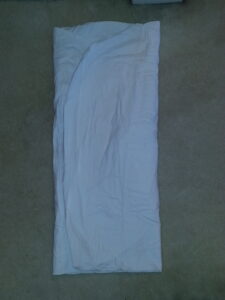 All of a sudden, I knew I’d uncovered The Secret! So take that, Rhonda Byrne!

I’ll admit, my sheets don’t fold as perfectly as Martha’s do, but now I can get three sets in the space I could previously only get two. And I have a whole extra shelf in my closet. And the well-folded sheets unfold without a ton or wrinkles, so they look better on the bed.

Can you hear my heavy sigh of satisfaction?? You should…it’s pretty loud because I’m so proud.

Learning to fold a fitted sheet reminded me that I could conquer anything as long as I stuck to it and didn’t give up. Isn’t that one of the benefits of a bucket list?

For me, it was a great way to end the old year and get a confidence boost for the new year.
What about you? Have you ever done a mundane thing that had a big impact on your psyche? Let me know and I’ll share it on FB to give other women a boost (and maybe a little laugh too).

BTW: I love the Martha Stewart luxury flannel sheets. Not the regular flannel (they’re scratchy). But the luxury flannel is soft and, even after many washes, they stay soft. Yes, they’re pricey (they retail at Macy’s for $185. BUT I just bought a queen set at Macy’s, on sale and with a coupon, for $34.00. And they fold flat!

Articles and advice for your pre-retirement. Planning ahead will allow you to make the most of your retirement instead of feeling lost and unprepared.