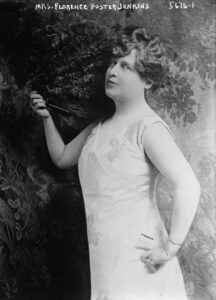 Was it her charisma? Her social status? Her sense of purpose? Whatever made Florence Foster Jenkins the toast of the town, it was certainly NOT her singing. So why are we fascinated with her now, seventy years after her death?

Nothing stopped Florence from performing

What was stunning about Florence Foster Jenkins 1944 performance (as portrayed brilliantly in the latest Meryl Streep movie) was that, though she loved singing, Florence couldn’t carry a tune to save her life (neither can I, so I felt an immediate kinship). While vanity keeps me from singing in public, nothing stopped Florence from performing, and doing it with great aplomb!

After watching the show recently, I left the movie theater a little obsessed and wanted to know more. An online search revealed that Jenkins was from Wilkes Barre Pennsylvania. She was a trained pianist who was so good that, as a young child, she played at the White House for President Hayes.

As a teenage newlywed, Jenkins contracted syphilis from her much-older husband; she divorced him after getting sick. But, since there were no antibiotics in her day, she was treated for syphilis with mercury and arsenic. The combination was so toxic that it affected Jenkins central nervous system and rendered Jenkins both bald and with a host of medical problems. She ditched the guy, but what he did to her plagued her for the rest of her life. 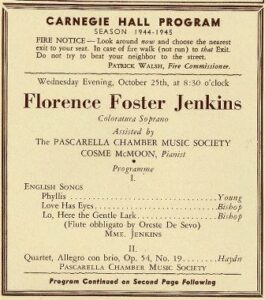 In the late 1800’s, there was far less acceptance for divorce and disability than there is today. Most women would have retreated into an obscure and regret-filled existence. Jenkins didn’t. She fused her passion for music with her social status to become a powerful force in the musical community, gaining a positive reputation in Philadelphia before moving to bigger and even better things in New York. One of her creations was the Verdi Club, a social club that focused on opera. It grew to over four hundred members.

“Music is my life,” she said, and neither her health problems nor her musical shortcomings stopped her from doing everything she could to fill her life with what she loved. Given her many physical challenges, Florence Foster Jenkins personal and professional victories were astounding!

In her seventies, and in spite of her screeching hot mess of a voice, Jenkins recorded a record album which became her record label’s biggest seller of all time. When she gave her one and only performance at Carnegie Hall, some in the audience actually thought she was a comedy act. But Jenkins gave herself to that night with everything she had. To this day the Florence Foster Jenkins performance is still Carnegie Hall’s most requested performance of all time.

Florence Foster Jenkin’s passion attracted a cadre of loyal friends and staunch supporters who advocated for Jenkins even after her death. Her long-time companion, St. Clair Bayfield said, “She had star quality…You could feel that in the applause. People may have laughed at her singing, but the applause was real.”

Meryl Streep, in an interview for UK’s Mirror, said: ­“Florence kept something we all have when we are children, when you can’t really do anything that well, but you hurl yourself into the imagining of it and take delight in the doing.”

Flourishing through the persistence

To my way of thinking, Jenkin’s victory flourished through the persistence with which she embraced what she loved. It pushed her to overcome a host of challenges. The most victorious thing about Florence Foster Jenkins can be summed up in her own words: “People may say I can’t sing, but no one can ever say I didn’t sing.”

I think I, and actually every woman, can take a page from the Florence Foster Jenkins playbook. When your passion flows through you to others, you attract all the right people and situations around you.

What are you that passionate about now?

Interested in bringing your personal vision to life? Join the Victorious Woman Project and see where it will take you.