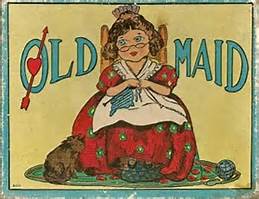 Last spring I read an interesting article by Cooking Light’s Amanda Polick about being older and not married. It’s what old timers would have called an “old maid.”

I thought about it today. A colleague introduced me to a smart and savvy victorious woman. She wanted to know more about the Five-Year Marriage™. We talked for a short while. Then she asked me what advice I have for single women who want to get married.

I understood her anxiety from my single days. There were so many weddings! And I was a bridesmaid seventeen times!

During the reception, invariably someone asked why wasn’t I married. Sometimes they made me feel like there was something wrong with me.

Of course,  when I answered, I put on a brave face. Sometimes I explained that I hadn’t found the right one yet. Other times I laughed and said, “always a bridesmaid, never a bride.”

It wasn’t that I didn’t date. I did, but not a lot. When I did, I couldn’t seem to make the connection last long enough to even wonder if he was “the one” for me. Friends told me I was too picky and too fussy. They said I had to make compromises.

However, as time marched on, many of the people whose weddings I attended started getting divorced; they were the lucky ones. Too many friends didn’t get divorced but should have. That wonderful man who was once the man of their dreams turned out to be a nightmare to live with every day…year after lonely year.

Traditional Marriage Is Rarely “Happily Ever After”

Over time I started to realize that marriage wasn’t all that it was cracked up to be. My focus changed and I decided to work on being the best me, without a man. I developed a new attitude (thank you Patti LaBelle).

So, when the younger woman asked for tips on getting married, the first thing out of my mother was, “Remember it’s better to be an old maid than wish you were one.”

That wasn’t all. Here is the rest of my advice:

So, whenever you feel frustrated because you haven’t yet found “the one” yet, be grateful. Think about the guys you dated that you didn’t marry and remember: It’s better to be an “old maid” than wish you were one.

The Five-Year Marriage® doesn’t mean five years and you’re out. It’s grounded in the reality that things change and people change. Because they do, from time to time you need to rethink, reorganize, and reset your relationship. Five years is a realistic and practical time frame for doing it.

Sure…maybe the ’til death marriage made sense hundreds of years ago when people only lived to be 40. Or maybe it even made sense in old-century patriarchal times when women were expected to stay home to cook, clean, and make babies. It’s what your grandmother did – maybe even your mother. But you don’t have to! There IS a better way! Here are your next steps: