May is International
Victorious Woman Month!! 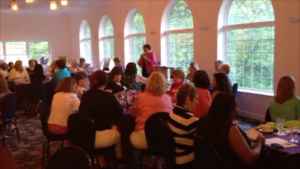 This is our 9th year of celebrating women and victories!

It all started with an idea I got one morning as I woke up. The idea was for the book Victorious Woman! Shaping Challenges into Personal Victories. But, as soon as my feet hit the floor, I forgot about it. Do you ever do that? Get an idea and ignore it?

Well, my idea wasn’t going anywhere. It came back the next month, and then, as the result of a medical problem, came back in the form of a virtual 2×4 between the eyes. As soon as I was better, I started interviewing for the Victorious Woman Book. It was published in 2005.

Then, in 2006. McGraw Hill’s Chase’s Calendar of Events gave me an opportunity…and I snapped it up. Victorious Woman Month in May was approved the following year, right at the end of April. That year, and for a few years, I celebrated Victorious Woman Month by inviting neighbors, friends and colleagues to a potluck celebration in my home. It was fun and a good opportunity to get together and talk about women and victories. After a few years, a local business in my hometown of West Chester PA sponsored the event at the shop.

Then, in 2011, I had an opportunity to bring the celebration to a bigger venue, The Edgmont County Club in Edgemont PA. That year it was a partnership and was called “Tea and Victory – not you mother’s kind of tea party”. We had about 40 women and celebrated women, victory and the beginning of the Phil-Hanna Scholarship Fund for Women.

The following year, in 2012, it became The Girlfriend Gala. Ever since then it’s grown in both size and stature!
The power of just one idea…an idea that I didn’t ignore and let slip away.

You have an idea…you only need one…what is it?

Take that idea and turn it into a victory…and celebrate it with us. Share your story below….

News and important information about Annmarie Kelly, The Victorious Woman Project and/or The Five-Year Marriage.