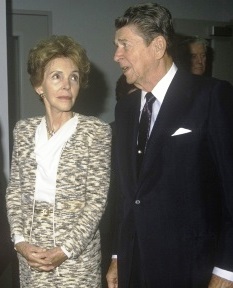 As I read about her this week, I learned new things. I knew Nancy Reagan was an actress before marrying then-actor Ronald Reagan. What I didn’t know was that she was born in Flushing Queens – just like “The Nanny” (still playing in reruns on at least one cable station).

The first is how, as first lady, she was fiercely devoted to Ronald Regan. Politics aside, theirs seemed to be quite the love story. At one point, Nancy Reagan published I Love You, Ronnie, a compilation of letters the president wrote to his spouse. Some of the letters are silly things while, in others, the love between them practically jumps off the page; it’s quite beautiful. That love and fierce loyalty continued after the couple left the White House and during the president’s sad, slow decline from Alzheimer’s.

The other thing I remember about Nancy Reagan is how much she was vilified in the press. The only other first lady I can think of who got as much criticism when she was first lady was Hillary Clinton…and for very different reasons. Nancy was mocked because of her expensive taste in the white house, including her clothes and the white house renovations, and her devotion to her spouse.

With Hillary Clinton, it was more professional. In the beginning of the Clinton presidency, she went right to work on Hillary-care and was quickly trashed by all sides – which always made the criticism seem sexist and chauvinistic vs. substantive; it seemed unfair.

A couple years later, however, when all Bill Clinton’s proclivities surfaced, Hillary went all “Tammy Wynette ‘stand by your man.'” Frankly, that really disturbed me because, during Clinton’s first presidential campaign, Hillary was strong about insisting she wasn’t that kind of woman. Instead, she was a woman working out a problem situation in her marriage….like many women. I bought that story.

Even now, as Hillary talks about being for women’s rights, and makes it a centerpiece of everything she says she stands for, she continues to handle Bill Clinton’s serial philandering like the 1950’s housewife dependent on her husband’s money. While sex might be Bill Clinton’s thing, lying is Hillary’s. And not just lying to you and me, it seems she lies to herself, telling herself the stories that she wants to be true instead of the ones that actually are true.

Leaving a bad marriage is a tough move to make

I admit, it takes a lot to leave a bad marriage, especially when there is money, power and social position involved. But I also think staying sucks the life out of your soul. Because of Victorious Woman, many women have bared their souls to me and said that all the money in the world couldn’t make up for the empty life of their past (or current) relationship.

I know every woman doesn’t agree. When I express my opinion that I believe it’s incongruent for Hillary to stay in a marriage that belittles and demeans her as a woman and then talk about being for women’s rights, almost every defender of Hillary says, “what was she supposed to do, leave a sitting president?” Well, no, I don’t think she should have left a sitting president then. But, and I’m saying this because, based on the models I hope I’d follow, once out of the White House, I would have kicked his sorry butt to the curb. And then I would have become powerful without him.

Tough choices can lead to shocking truths – or not so shocking

Like Ariana Huffington did. She divorced Michael Huffington, who served in the US House of Representatives. The couple split in 1997 amid a myriad of rumors. A year after they got divorced, he came out in Esquire Magazine.

Ariana could have stayed. Instead, she went out on her own and made herself powerful in her own right. She decided that, to be successful, she didn’t need to hang onto a gay guy’s coattails, and face the (“poor Arianna”) pathos of her peers every time the couple was seen together.
It seems Hillary decided she did.

“What if” you might say, “in spite of all Bill’s sexual dalliances, Hillary still loves him?”

Of course she loves him. So what? You can still love the man, care about his well-being and still be friends with him. Ariana Huffington’s models demonstrates that point when her ex occasionally writes for Huff Post. They still get along, she can still love or care about him and work with him. At the same time, she doesn’t let someone else’s lies and scandals make her the butt of jokes and the target for unwarranted criticism.

Any woman can separate the man and the marriage.

And, after you leave, not only are you free to empower yourself, you’re free to find someone who really loves you…just you.

Which takes me back to Nancy Reagan.

She didn’t stop enjoying her clothes or gazing up at her spouse. She adored her spouse, had great influence on the president and was his best friend. She could joke about the criticisms, which she did eloquently at one press club dinner. That night, after the press presented a skit that mocked her “style” and its expense, Nancy Reagan excused herself. She returned, on stage, dressed in mis-matched clothes and performed “Second Hand Clothes” (to the tune of Second Hand Rose). Nancy Reagan showed the press and politicians that she could make fun of herself…be a good sport.

A couple years later, she was diagnosed with breast cancer and had a mastectomy.

Even that didn’t curtail her style…or her determination. After going public with the disease and her treatment, her forthright attitude encouraged many women to get mastectomies…and it saved lives.

During Women’s History Month I think it’s good to look at recent women in history- the ones whose stories we read while it was happening (vs. women that can only be found in history books). Current women give us samples of behavior happening in our time. We can think about them and watch and model what they do, or watch and reject their actions.

One thing is for sure. What Nancy Reagan figured out as she traveled through her life, “You learn something out of everything, and you come to realize more than ever that we’re all here for a certain space of time, and, and then it’s going to be over, and you better make this count.”

When your life is over, you’ll be the woman whose history others will remember. Maybe it won’t make front page news, like Nancy or Hillary or Ariana. Maybe it’ll just be small stories told by your children or grandchildren. But you’ll be part of Women’s History Month just the same.

What kind of stories will they tell…and are they the kind you want them to tell?

If not, what will you do today to make that different?